Americans like salt—but they also want healthier food. Learn how you can keep the flavors they love while reducing the amount of sodium in your recipes. It could be as easy as adjusting the acid balance. Learn seven top tips, plus get links to great new reduced-sodium recipes here.

According to the Centers for Disease Control and Prevention, Americans consume way too much salt. In fact, the average American over the age of 2 take in a whopping 3,436 mg of sodium per day—49% higher than the USDA's newly issued Dietary Guidelines for Americans, which advises no more than 2,300 mg per day. And it's more than double their recommended Adequate Intake (AI) level—the optimal goal—of 1,500 mg per day. The USDA suggests even stricter limitations to multiple sub-populations (people aged 51 or older, African Americans, people with diabetes, hypertension, or chronic kidney disease), with a daily target not to exceed 1,500 mg.

But the really sobering news is that when the American Heart Association, together with the USDA, took into account the high current consumption levels of sodium in the American diet as well as the high level of sodium in the food supply, they concluded that a guideline of 1,500 milligrams was not achievable. In the interim, they have suggested the recommendations listed above: less than 2,300 mg for the general population, and under 1,500 mg for "at risk" population groups.

Take one step at a time

There are multiple negative side effects that can result from diminished taste, including a loss of appetite and poor nutrition, as well as being tempted to use too much salt and sugar. One reason the average sodium consumption is so high is that the American palate has become essentially "desensitized" to saltiness. Another important factor is that our tasting ability decreases with age, which can start to happen around the age of 60.

But if food isn't flavorful or doesn't taste good—however the diner perceives that—he or she is less likely to eat the food, along with all of the important nutrients they need to maintain health. This suggests that it would be very difficult to move from a 3,600 mg daily consumption to 1,500 mg all at once, and have diners accept the change.

If you are developing a strategy for reducing sodium in your kitchen, a long-term plan that allows for palate adjustment is worth considering. The Mayo Clinic suggests that palate adjustment can occur in as little as two weeks. At Nestlé Professional, research indicates that you can typically remove approximately 10% of sodium from a dish without having a perceivable taste difference. Step-wise intermediate reductions, planned over a period of time (a 5% reduction per month for six months or 10% per month for 3 or 4 months) can "evolve" diners to a more appropriate daily sodium consumption and maintain their appetite and diet-adherence. It's stealthy but it works. 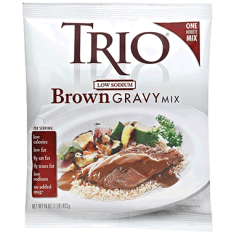