Lots of vegetables and loads of flavor are the hallmarks of Middle Eastern foods. Learn how to incorporate this healthful and eye-appealing cuisine in your operation.

Hot on the heels of the Mediterranean trend comes a more specialized interest in the food and beverages of the Middle East. Healthy, vegetable-focused, and full of flavorful ingredients like olives, tahini, yogurt, za’atar, pomegranate, preserved lemons, and more, the cuisine of countries like Lebanon, Israel, Turkey, and Egypt is exotic yet approachable, and completely right for the times.

Spice blends, condiments, and sauces represent a great point of entry for Eastern cuisine. These and other ingredients provide the Middle Eastern flavor palette.

For more on Middle Eastern flavors and ingredients, see below.

The Middle Eastern love of bold flavors, spices, and fruit is also seen in the region's beverages, such as thick, strong Turkish coffee, and tea with mint and cinnamon.

Flavorful creamy dips are part of the Middle Eastern tradition of mezze, a tapas-like social occasion that can also be accompanied by olives, feta cheese, vegetables like stuffed grape leaves, and the ubiquitous flatbread. Many of these can be used as a sauce on sandwiches and in salads.

Traditional rolled and folded flatbread sandwiches are among the most easily translatable Middle Eastern specialties.

Tip: Almost any filling, from tuna salad to grilled vegetables, can be given a Middle Eastern treatment with flatbread and such garnishes as cucumber and tomato, feta cheese, tahini, yogurt, and quick pickled onions.

DID YOU KNOW?
GET STARTED 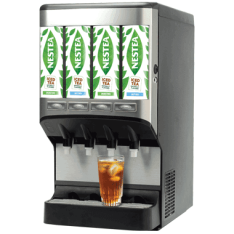